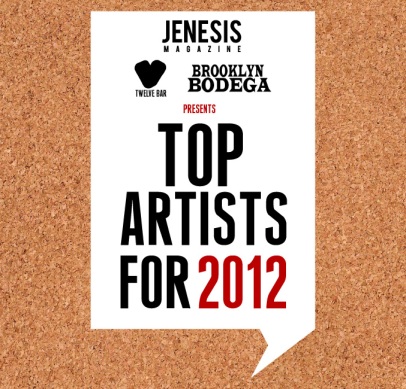 On Monday, December 12th JENESIS Magazine will be releasing for a full week, twice a day, its group of Top Artists To Look For In 2012. Co-Sponsored by Twelve Bar and Brooklyn Bodega, they’ve chosen a hardworking group of independent artist who have worked their way out of the sea of unheard individuals. Making great advances in their careers in 2011, these artists have been receiving noticeable nods from fans, blog sites, and some well known individuals. Along with their profiles, they will be posting up an additional post of 5 songs provided by the artist that they felt summed up their career until now. Jenesis has had a good record at profiling your next favorites for the past 4 years (ahem Wiz, Mac Miller, Dom Kennedy, Casey Veggies) so you might want to pay close attention.
Only at www.jenesismagazine.com
Twitter: www.twitter.com/JENESIS_Mag