I can never get enough of this twosome. Not only is it tight that brothers Malice and Pusha T get to rap alongside one another, but they both possess great musical capabilities lyrically. The swagger is on 1, followed by a zero zero.Check out the video for “Popular Demand” by the Clipse feat. Cam’Ron, who makes his return back to the limelight.

The Clipse’s highly anticipated album Til The Casket Drops, is slated for release December 8th 2009.

“The love for music has been in me since a young age, writing has always been a passion as well, from poems to short stories to the booth,” says P-Prop.

Check out this studio session:

Jay Moore, who also runs the clothing line Ace of All Trades, has a foothold in so many areas within the musical circuit: writing, recording, producing, deejaying, editing, are just a few of his capabilities. “I’ve been heavily interested in the world of music since a young age (as cliche as it sounds) as well as the world & current events. Music has become my outlet for everything and I hope everyone can come along for the ride and enjoy the journey.”

A Few Tracks from the fellas off their upcoming mixtape Recession Proof:

Lyricism is back people, let’s embrace it.

Wiz Khalifa featuring then Kev tha Hustler collab on an awesome song, with a crazyy funny video to match. Shouts to Sledgren in the fly fur cap. Comedy. Enjoy…

If you are just now jumping on the Wiz bandwagon, or still have NO idea who this flyy cat is, I’d suggest you take a gander at this in-the-skyy-guy. Wiz Khalifa hails from Pittsburgh, PA and has been actively blazing a trail on his quest to write his “Name on a Cloud” by blowing up the mixtape market with no holds “B.A.R.red.”

Finally about to break onto the mainstream stage with a highly anticipated album entitled, Deal or No Deal dropping in stores November 24th 2009, Wiz speaks with Fab 5 Ent about his upcoming releases, past music, music colleagues and more…

The first time I ever heard a song by Wizzle was on Buffalo’s local radio station 93.7 WBLK, in late 2007, d

uring the “In The Mix” segment from 9 to 10p where they do a powerhour of just full on music, commercial free. The tune sampled a 1999 techno club banger by Alice Deejay entitled “Better Off Alone,” and from the moment I heard him spitting over the sampled track I knew whoever this kid is he’s something dope.

The song, which I found out later to be “Say Yeah” was on and they only let about 1 minute of the song play, I hurried and jotted down whatever lyrics I could make out on my cell phone and went home to google the song. To no avail I could not find any lyric search engine site with the song and I had to do a lot of grunt work to find WHO made this track, and yet alone the name of the song. Finally found the lyrics, which led to the name

, and the song title. And the part of trying to find the mp3 file, was a task in itself. Limewire didn’t help and neither did any other file sharing program.

Finally resorting to the dreaded iTunes, there it was for a 99 cent download Wiz Khalifa – “Say Yeah”. That moment changed my life. ahhhhhhh good muzik is back. *sighs*

Youngin On His Grind [off Show and Prove]

Some of my own personal favorite Wiz tracks include (but are definitely not limited to): 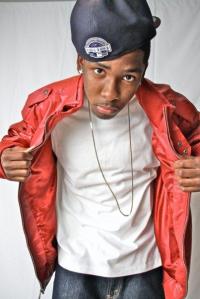 Dynamic Duo Real Estate is a local hip-hop group from Buffalo, NY looking to blaze a trail and make moves within and outside of their hometown. Darius Grayson (D Dash Eazzy) & Marcus Cherry (Mar$) both aged 20 make up the tag team tandem, whose objective is to further connect and network with listeners, fans and music lovers alike within their peer group by creating songs that are reflective of the everyday college/middle class struggles and issues.

Be on the look out for upcoming events featuring these young artists, one of which D Dash Eazzy (right) will be performing at Buffalo State College Friday November 14th, 2009. Here he will be opening for the Apollo Nite Talent Show featuring ATL comedian Lil Duval. Tickets are still available at the Buffalo State Student Union for $10.

Curren$y prepares for take off with this new song titled “Life Under the Scope.” Who said the Hot Spitta wouldn’t make it without Wayne? Looks like they may have to eat those words. No Mp3 released yet, but enjoy the video…