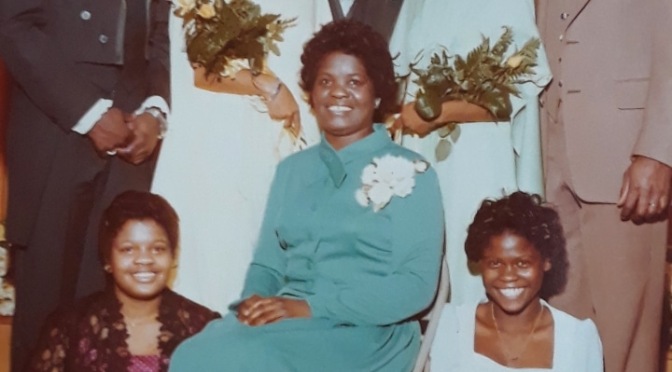 Kelila came to my room for the uptheeth time that night, extra fussy. It was 11:30 pm. I walked her back to her room when I noticed what was on her bed. I looked over at Zaire’s long sleeping body and smiled. Before Zaire drifted off to sleep, he extended the best comfort he knew he could to his baby sister. I felt the warmth of pride from that. I held Kelila’s hand as she climbed back into bed.

“Do you know who made this?” I asked her.

She shook her head to each side rattling barretts against her pillow case.

“Grandma Mary ..”  I lay next to her and pull Zaire’s quilt up over us.

“Grandma Mary is papa’s mom. She’s my g’ma . wanna hear a story about her ?”
Kelila shook her up and down as she cuddled more into me, pulling my arms around her body .

I told her stories about the Alchemy of Grandma Mary’s hands. How she carried in her muscle memory cultivating the ground to bring forth life from South Carolina  into the backyard of a new northern city. She passed on gardening to her children and grandchildren like me. Grandma Mary raised all seven of her children with those hands and generations followed up after that.

. When the majority of us Grand children had children of our own , we gathered at Grandma Mary’s house for a special ceremony .Each family  contributed food that we cooked for this gathering. We stuffed ourselves of dinner and dessert then gathered into the living room.We crowded into the room until our  bodies overflowed onto the stairs and into the dinning room to see the Grand unveiling. Grandma Mary sat in her arm chair placed in front of the television facing everyone with cloth bags stacked beside her. She had been working on quilts for all her Great – Grandchildren and this was the day she gifted those creations to them. She called each Great Grand Child – from oldest to youngest by name up to come sit on her lap. She unfolded each quilt and placed it around their bodies then held it up for everyone to see. Each of us parent snapped photos to capture this special moment. For every child and grandchild that came after she made quilts and afghans for us . All of us in our homes still had our first quilts . We knew that regardless of our beliefs these blankets had powers. The cloth was held in her palms as she wove her love in  with each stitch and thought of us personally.

“When you pull this quilt over you, you are covered by Grandma Mary’s protective energy . No harm can find you, nothing scary can come get you. Because what Grandma Mary’s hands makes grows and lives free, as long as it is under her protection, and within reach of her energy.” I told Kelila. I kissed her cheek good night as she relaxed and  drifted off into a sound sleep. 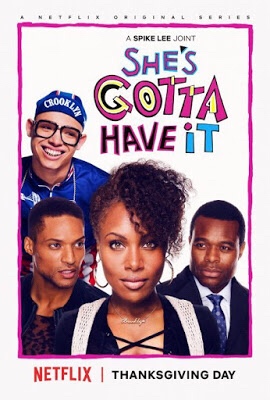 I started this Sunday Binge watching ‘she’s gotta have it” the original movie and the new Netflix series. I enjoyed its ingenious way it portrayed relationships, romance, budding into black womanhood & manhood. It did not try to hide any flaws of our inherit Bad behaviors but, laid them bare exposed to the audience. Each character suffered some form of emotional immaturity as well as misogyny and patriarchal beliefs.

Reflecting on that has me questioning my own dating history- communicating and honesty have been the downfall to all my past relationships. As well as cheating. I feel it connects back to the societal mindset the monogamy is the only acceptable relationship status, the proper way to love and be loved – I challenge that theory. I’ve lived it’s contradictions and have crossed paths with folk that prove its falsehood.

At a dinner party a few weeks ago I had the pleasure of being in conversation with two of my black femme friends that both happen to be involved in polyamory/ open relationships. One is planning to marry her partner whom she’s been with for several years and the other has newly been introduced to polyamory through a partner who has a live in partner already. Both women shared their experiences and I shared my story of an open relationship gone wrong from a few years ago. My friend shared her own wisdom and gems she’s learned over the years- what works and what doesn’t. I’ll boil it down two main vital components: honesty and communication.

She explained there are “rules” boundaries that must be set at the onset with all partners. Her partner that she has been with the longest she stressed the importance of the strength of their communication- discussing everything so that nothing is left to question. If there is no doubt, in whatever capacity the relationship is, makes it so much easier to show up as our full selves in. Imagine for a moment airing everything out openly and being able to be in relation with no fear of the unknown lurking.

Also something that stood out most from the conversation was how she interacts with possible new partners, who either show interest in her or if she feels the vibe is mutual. Once that interest is established she explains that she is in an open relationship and would like to kick it or hang out and do something(taking sex off the table as the first interaction because it’s Not about the sex)- explicitly making it clear that she is not the girl that will be in a serious relationship with them – but that all other areas of relationship are open outside of that. With doing that she gives the person the opportunity to entertain that relation or leave if it doesn’t fit their needs.

From my experience and listening to the experience of others, polygamy is more about respecting folk’s autonomy and communicating properly,and less about that possessiveness that commonly shows up on monogamy. Yes, sex is apart of it- just not the myth that folk believe is All of it. “It’s that open door, that if something is to happen or happens it’s okay, not necessarily encouraging it but being accepting of whatever happens” (I may have not quoted my friend verbatim, but y’all get the premise of it).

“She’s gotta have it” failed to break that myth, instead it acted as kindling fueling it. Too many times did Nola, Greer, Jamie, Mars, and Opal deny each other mutual autonomy over bodies and beliefs.

Nola was honest about her partners but not boundaries, which is where problems in the storyline occurred from. She cherry picked what and when communication would happen which also added even more to those problems. I completely get, I understand the story it’s telling – relationships are messy and hard and most of the time we go in unprepared with the right tools to navigate them. At the same time I’m pained to see the myths of what polygamy is portrayed this way. I crave to see the stories of black women/ femmes in their full power of autonomy, I can guarantee drama and great storyline can still come from these.

It was also interesting to note that despite her relationships /friendships she desired to have children of her own one day – which could possibly require the audience to question the “normal” family/ community dynamic. She ends the movie saying that she is not a ‘one man type woman’, and I wonder what a black woman in an open relationship with a family would look like.